"The Ruling Class" to "The Riot Club" - Plus ca Change 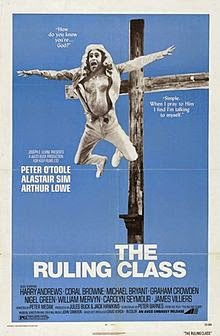 Oscar Pistorius and a Lesson for Abusive Partners

Some years ago, a serving police officer was talking to me about the difficulties of bringing charges in an assault case when there were no witnesses. Essentially, what he said was this:
"If A attacks B and someone witnesses the attack, then we charge A for assault. If A attacks B and there are no witnesses, we don't know who started it, so we charge the person with the lesser injuries."
There are a number of concerns with this method, but there are some similarities (and some very obvious differences) with the Oscar Pistorius case. The similarity lies, not in who is to blame for the killing of Reeva Steenkamp, but in the Prosecution's difficulty in proving that Pistorius intended murder. In other words, without witnesses, justice might not be done in either case, because there is insufficient evidence to prove otherwise. The person with the lesser injuries might have simply been defending him or herself; Pistorius might well have intended murder, but there is no conclusive evidence.
A few months back, I wrote a blog post about the Pistorius case, in which I set out my doubts about Pistorius' explanation of how he came to kill his partner. I have similar doubts about the verdict delivered by Judge Masipa yesterday, which, as we all know, found Oscar not guilty on the charge of premeditated murder. I am not alone in having doubts, of course. Reeva Steenkamp's distraught mother has said:
"It doesn't add up," said Mrs Steenkamp, composed but evidently bitterly disappointed.

Holding her husband's hand in a hotel room hours after the not guilty verdict was read out, she told American channel NBC: "She died a horrible death. A horrible, painful, terrible death. And she suffered, you know? "
Mrs Steenkamp is right - it does not add up. I find myself puzzled by Judge Masipa's thought processes and am dubious about her conclusions. She accepted, albeit with reservations, that Pistorius did not intend to kill Reeva Steenkamp, and could conceivably have mistaken her in the darkness for an intruder.
She accepted Pistorius' story that he was terrified for his life, and thought Steenkamp was safe in the bedroom when he fired four bullets through the wooden toilet door.
The only possible verdict, according to Judge Masipa,  was culpable homicide - in Britain, we call it manslaughter. This verdict carries a sentence of up to 15 years in South Africa, although it could lead to Pistorius doing nothing more than community service.
Now, in expressing my opinion, I am well aware that I am thousands of miles away, and perhaps do not fully appreciate the situation in South Africa. A South African lady explained to me that, living in a violent society such as South Africa, when an intruder enters your home, you panic. It might explain Pistorius' behaviour that night.
It might, but I don't think it does. As Owen Bowcott says in today's Guardian, South African legal experts are gravely concerned at the verdict:
"As state prosecutors announced they were considering appealing judge Thokozile Masipa's decision, legal experts suggested she may have focused too closely on the relationship between Reeva Steenkamp and Pistorius.
Had there been an intruder behind the toilet door, as Pistorius told the court he believed, then firing four shots into such a confined space would probably have been considered murder by other courts, some lawyers argued."
This is quite correct - even if Oscar did not intend to kill Reeva Steenkamp, he certainly intended to kill somebody. This is quite clear from his actions. If he had been as frightened as he said he was - why did he not stay in the bedroom? If he was in sufficient control of himself to confront an intruder, why did he not fire a warning shot above head height, or call out a warning? Once that hypothetical intruder had locked himself in the toilet, he was effectively trapped and, practically and legally, at Pistorius' mercy (such as it was).To me the conclusive evidence of a desire to kill is the fact that his shots were angled to hit a seated person in the toilet. The photographs of the toilet door clearly indicate this. Not only this, Pistorius fired four times, with reasonable accuracy. One shot could have been fired in panic, but I do not accept that he was out of control when firing four. No, I am convinced that Oscar Pistorius was out to kill that night, and deserves a long sentence. The best that can be said for him is that he was criminally irresponsible. At worst, he is a wilful murderer.
To conclude, I have to say that the defence lawyers in this case have been very skilful in a number of ways, not least by using the world's media as a theatrical means of presenting their client to the world as a heartbroken man - despite the evidence of his darker side.
Lastly, I return to the point at which we started - the possibility of injustice arising from lack of witnesses. As Deborah Orr says in today's Guardian:
"Many people feared a failure of justice comparable to OJ Simpson’s acquittal for the murder of Nicole Brown, his former wife, and Ronald Goldman, who had been visiting Brown’s house on an errand. They are relieved that Oscar Pistorius has been found guilty of culpable homicide. I’m not. I’m troubled by the fact that all over the world, people now know exactly what to say when they shoot their partner dead, at home, without witnesses."
In other words, this case has set a precedent for abusive partners everywhere. The guilt of Oscar Pistorius runs wide and deep.
Posted by Geoff Parry at 15:35 1 comment: