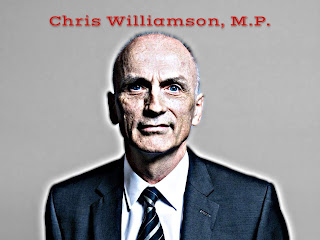 Travelling home on the tube this afternoon, I read an article in the Evening Standard which was headlined: "Labour's anti-racist reputation is slipping away, claims MP". The article, by Kate Proctor, detailed what we know from the TV, with a few added details that I didn't know.
Williamson, MP for Derby North, has been accused of anti-Semitic behaviour and was suspended in February after telling Labour activists that Labour had been "too apologetic" over alleged anti-Semitism in party ranks. Ha had also invited Jackie Walker, a suspended Labour member, to host a showing of "Witch Hunt", a film that challenges the view that anti-Semitism exists in the Labour Party. It was to be shown in the House of Commons on March 4th this year, but was cancelled. 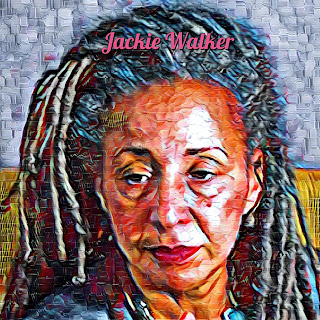 Williamson was also criticised for signing a petition supporting Gilad Atzmon, a jazz musician and an ex-Israeli Army soldier who has renounced his Jewish heritage. Mt Atzmon has been quoted as condemning "the Holocaust religion". He has written extensively on the question of Judaism and tha Holocaust and is deplored by both Jewish and Palestinian commentators. He has even recommended that people interested in the Holocaust should read David Irving's books - David Irving, of course, being the convicted Holocaust denying "historian"and friend of neo-Nazis around the world. Mr Atzmon should be warned: simply because he is a "self-hating Jew" would not have saved him from Hitler, however much of a "useful idiot" the Holocaust deniers and neo-Nazis find him now. 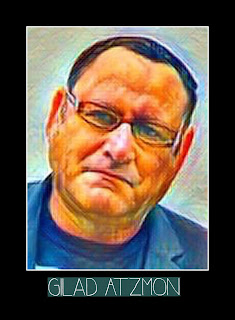 Returning to Mr Williamson, we now know that, following protests by over 100 Labour MPs, he has been suspended again from the Labour Party. There is much to be said on this issue, with pros and cons on both sides. When it comes to what many Labour Party members regard as anti-Semitism, Mr Williamson has some serious charges to answer. He has helped raise funds for the expelled member, Marc Wadsworth, and appeared on a public platform with another expelled member, Tony Greenstein. Ominously, he has suggested that Israel was behind the Salisbury poisoning and given public support for President Assad of Syria. What I find particularly disgusting is his endorsement of one Vanessa Beeley, a mouthpiece supporter for President Assad. Williamson stated that he thought it "a privilege to hear her speak...about her experiences of reporting from Syria". After Jo Cox was murdered in 2016, Ms Beeley's response to this tragedy was to describe the late MP as "a warmongering Blairite". Careful, Mr Williamson: lie down with dogs and you get up with fleas.
In fairness to Mr Williamson, he does have his defenders and admirers. In 2017, the website "Red Pepper", to which Mr Williamson himself contributes, hailed his re-election:

"Unlike most MPs, as a former brickie, Chris has experience of life as a manual worker, and hasn’t forgotten his roots. An active supporter of animal rights and himself a vegan, Chris takes environmental issues very seriously, and is a passionate supporter of the trade union movement."

And of course, he is an outspoken supporter of Jeremy Corbyn. I know many such activists, and I have yet to find a racist among them. Accuse them of anti-Semitism, and they will vehemently deny it, reiterating the old saying: "Anti-Zionism isn't anti-Semitism". People such as this are the lifeblood of anti-racist activity, opposing everyone from the EDL to the BNP. Racism is not the problem with such people. The problem lies in the fact that they are incapable of empathy with their opponents and every bit as capable of acting undemocratically as they claim their opponents are, when accusations of anti-Semitism are made.
I have no doubt that Mr Williamson's defenders regard him as a victim of the pro-Zionist Labour establishment, or Mossad, or the CIA, etc, etc, and passionately support his fight to stay in the Labour Party. In fact, they ascribe the Labour anti-Semitism crisis to Israeli machinations. And I agree that he should not be expelled from the Labour party simply because of his support for the Palestinian cause. However, there are ominous signs that, should the anti-Zionist-how-dare you-call-us-racists faction take control of the party, thousands of people will be facing expulsion for simply not agreeing with the new party line of total support for the Palestinians. Already, there are voices calling for the expulsion of Labour Friends of Israel, one commentator describing it as "a racist hate group". So, many hard-working, dedicated Labour activists would be expelled from the Parliamentary Labour Party and the constituency parties because their views on a foreign policy issue do not belong in the bright new orthodoxy. The Labour Party would become ideologically pure - and completely unelectable.
I am not a Labour Party member, but when I was, Zionists, anti-Zionists and Indifferent worked harmoniously to help the party get elected. In other words, it was the "broad church" described by Tony Benn. If it became a "democratic centralist" quasi-Trotskyist organisation obsessed with expelling deviationists and "splitters" such as I have described, not only would I never rejoin the Labour Party, but I would never vote Labour again. And so would many others abandon Labour; Jewish voters, for instance, would be totally alienated. I dare say that many of the Labour anti-Zionist lobby would say "good riddance" to all of us.
My sentiments exactly. I will be rid of a political party I no longer recognise as the one to which I gave my electoral loyalty for over half a century. From the outside looking in, I see Labour splitting into two blocs, each accusing the other of malfeasance and each itching to expel the other, should they get the chance. At a time when Labour has got the Tories on the ropes, they are arguing among themselves about an issue which has very little to do with domestic British politics, and letting this government of the hook. The only people that can benefit from this situation are the smaller parties. The next general election is going to be quite an event.
Posted by Geoff Parry at 19:37 1 comment: 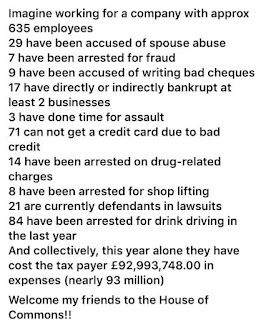 Enemies of this blog, which include George Galloway, OFSTED, Vladimir Putin, Nigel Farage and the Iranian Government, will be hugely amused at a recent faux pas of mine on Facebook. I posted the item above without checking its authenticity, something I have criticised others for doing in the past. The apparent list of misdemeanours by MPs is a hoax and is exposed as such on FULLFACT. It can be read by clicking on HERE.
There is little I can say to excuse my mistake. I could dismiss it as a "senior moment" or try to wriggle out of responsibility for my error by saying that many others fell for it as well. Instead, I shall try to explain it. It is true that, as the Roman poet, Horace, said :

The meaning, as we probably know, is that the wisest among us, even the great writer, Homer, make errors - "anyone can make a mistake". Nevertheless, we should examine our mistakes and learn from them, and that is what I propose to do here.
So, why did I omit to check the facts of this note? Why did I swallow this item of "fake news"? My self-analysis might be useful, as we are bombarded with fake news, advertising and propaganda of all types every day.
In the first place, I simply re-posted the item because I thought it would make a useful talking point. Mainly, however, I re-posted it because I automatically, albeit vaguely, sympathised with the underlying sentiment, even though it isn't true. In other words, whoever devised this list knew that a lot of people would accept it as fact because they were pre-disposed to believe it - including me, until I thought about it more clearly. And that, I believe, is a warning to us all: the most effective propaganda seeks to confirm our prejudices. Portraying politicians as corrupt self-seeking parasites is not difficult when you know that many people believe it already - in fact, want to believe it.
Does this point to a general fault in us all? Does it explain why so many voters in the USA continue to have faith in Donald Trump, even when his claims are proven to be false or exaggerated? Does it explain why so many voters in the UK support Nigel Farage and his Brexit Party menagerie? Aren't all politicians purveyors of fantasy? The answer to this last question is "No!", but far too many people in the UK seem to prefer the Brexit delusion.
As for me, I have learned my lesson and will try very hard not to repeat it. As G. K. Chesterton said in 1927:

Quite - in future, like me, will readers check for hoaxes on Snopes or Full Fact? I hope so. As for my detractors mentioned in the first paragraph: don't laugh too much, chaps. I'm still on your cases! 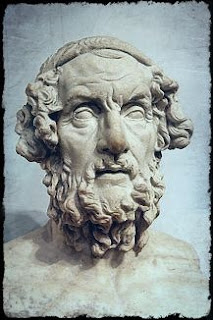 The Ancient Greek poet, Homer. If he could nod, so could anyone.
Posted by Geoff Parry at 15:06 2 comments: