Mr Angry and the Growth of Intolerance 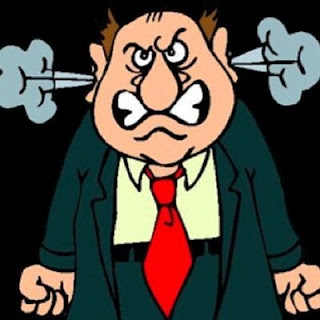 If we can describe the man in the cartoon as "Mr Angry", we might well ask what he is angry about. He might be cross for legitimate personal reasons; he might be angry over Brexit; he could be furious at the way his favourite football team has played; he might simply be cross because someone disagrees with him, and he hates that. The last of these possible factors seems to be coming more common in our society, and I think it worth considering here.
I am driven to discuss this by the appalling news that staff at Great Ormond Street Children's Hospital in London (GOSH) are being subjected to threats and abuse over the baby Charlie Gard issue. As "The Guardian" reports:
"Thousands of abusive messages, including death threats, have been sent to doctors and nurses at the children’s hospital in London, the chair of the hospital revealed. She said that staff were also facing abuse in the street. Families visiting their sick children had also been “harassed and discomfited,” they said."
I fail to understand the mental processes (or lack of them) of the people who send these threats. The hospital's decision concerning the treatment of Charlie would have been taken by a small management team; the vast majority of staff would not have been involved. Still, as the old saying goes:

"The mob has many heads but no brains."
And this type of mob, unlike street mobs, is difficult to counter. This mob's presence, for the most part, is not physical, but online. No amount of police can stop anonymous emails or casual insults by individuals in the street. To be fair, poor Charlie's parents have condemned the abuse against GOSH staff, having received abuse themselves.
This disgusting affair points to one question, I think: is Britain becoming more intolerant? In many ways, the answer would appear to be "No". In my lifetime, I have seen many positive changes. Racism is now widely frowned upon, despite the efforts of Enoch Powell and the far right in the past. Gay rights for men and women have become established in our society; even the Conservative Party has openly gay ministers in Parliament. Women now enjoy equal pay and employment status with their male counterparts; I can remember when women were paid less than men for doing the same job - and how many people thought this natural.
And yet - a number of commentators have expressed the view that disagreement between people on political and social issues is becoming more fraught. According to this view, for many people of left, right and centre political persuasions, the expression of a differing point of view to their own is regarded as being almost a hate crime. Rational debate, it seems, is becoming a thing of the past. Instead, people are entrenching themselves behind walls of bigotry, indulging in abuse and being abused, rather than engaging in constructive dialogue or discussion.
This state of affairs can be seen at its worst in debates between pro-Israelis and pro-Palestinians over Gaza and Palestinian rights. Having watched a number of events of this type, I have been appalled how two sets of people can sit in the same room barking invective at each other, each considering themselves to be right, and totally unwilling to achieve any rapprochement. Anyone (such as myself) who says anything critical of either side is immediately attacked as being an enemy. As Mussolini said:  "O con noi o contro di noi"—You're either with us or against us."
I hope this attitude does not become more widespread in Britain, nor can I accept that it will happen to the extent feared. If it did, society could not function. Simple disagreements would escalate into full-scale battles at the drop of a hat.
Nevertheless, during the benighted EU referendum campaign, we did see the polarisation of the UK into two opposing Leave/Remain camps, which led to a good deal of acrimonious disputation and invective, both before and after the referendum date. The campaigning divided political parties, workplaces, friendships and families. The division caused contributed to the violent death of a Manchester man, Duncan Keating, a "Leave" supporter, after an argument with a "Remain" supporting neighbour, Graham Dunn. And there is no doubt that it played a part in the killing of Jo Cox MP by the fascist, Thomas Mair.
Jo Cox's murder points to the fact that the intolerant minority in our society is becoming more active. They certainly mobilised for action during the recent election campaign. It was so bad that Theresa May has ordered an investigation into intimidation of election candidates. What is of note is that both sides of the political divide were targeted. Diane Abbott, in particular, was the subject of some horrendously vile abuse. She told "The Guardian":
“There was an EDL-affiliated Twitter account BurnDianeAbbott, I’ve had rape threats, described as a pathetic, useless, fat, black, piece of shit, ugly, fat, black bitch.”
From the other side:
"Simon Hart, the Conservative MP who called the debate, said the party’s whips office had been dealing with “at least three credible threats to colleagues every week, including death threats, criminal damage, sexism, racism, homophobia, antisemitism and general thuggishness around and after the election”.
I could be wrong here, but my guess is that the perpetrators of these despicable attacks, whatever their politics, are pretty similar in a number of ways. They are probably the kind of people who shout at the TV over issues that bother them but, before the advent of the internet, never vented their feelings in ways other than expounding their views in private or down the pub. At most, they would write a vitriolic, anonymous letter. Email, Facebook and Twitter have changed all that. As the much-abused MP, Diane Abbott, says:
“I think the rise in the use of online has turbocharged abuse because 30 years ago, when I first became an MP, if you wanted to attack an MP you had to write a letter, usually in green ink, you had to put it in an envelope, you had to put a stamp on it and you had to walk to the post box,” she said. “Now they press a button and you read vile abuse which 30 years ago people would have been frightened to even write down.”
I think we need to explore ways of returning to rational discussion and tolerance of others' points of view. If we let these squalid trolls of left and right dominate political discussion, then our democratic rights suffer. Not only our rights, but so do we in many other ways. As the great Maya Angelou says:
"If we lose love and self respect for each other, this is how we finally die".
Posted by Geoff Parry at 13:26 1 comment: