Abu Qatada and the Intelligence Men

I can't say that I find Abu Qatada likeable. If half of what is said about him is true, he is a really nasty piece of work. Yet, in spite of the fact that he has had reported links with terrorist groups and has, allegedly, encouraged the killing of wives and children of Egyptian police officers, we are to continue to have him living among us. Besides which, he entered the UK on a forged UAE passport in 1993, which surely, even then, rendered him liable to imprisonment and deportation? Instead, he claimed asylum and was granted permission to stay until June 1998. During that time, he worked to support Egyptian Islamic Jihad (who murdered western tourists in Egypt) and the Algerian GIA (who murdered as many people as possible). In March 1995, Qatada issued a fatwa justifying the killing of the wives and children of "apostates" (i.e. Muslim men who abandoned their faith). In 2002 he issued a 10-page booklet as an apologia for the 9/11 attacks. He is wanted in eight countries, including the USA and Jordan. And, as we know, his conviction "in absentia" for inciting bomb attacks in Jordan is the reason why he cannot be deported. It seems that he might be tortured there, and his alleged co-conspirators are supposed to have been tortured to incriminate him.
Now, just about every section of opinion in the UK finds this outrageous, and the government are under severe pressure to act decisively in some way. Still, we are told that Qatada will only be on bail and will be strictly monitored. Not that this brings much relief to the general public.
But there is one section of UK society who might be relieved that Qatada has escaped deportation - the UK intelligence community. According to Mark Curtis, from whose excellent book, "Secret Affairs",I draw much of the information given here, MI5 tried, from 1993 onwards, to use Qatada as a double agent to inform on Islamic militants in Britain. Curtis writes:
"Qatada's lawyers have said that he was monitored by the security services from the mid-90s and that "his actions had a large degree of tacit approval".
Mi5 certainly said, in 1997, that Qatada was not even a Jihadist (!), despite all evidence to the contrary. Besides this, they were warned by an Algerian agent that Qatada was raising money for terror groups overseas, yet did not act. Qatada himself has said that MI5 offered him passage out the UK in 2002, but he did not accept the offer. He is supposed to have "mysteriously" disappeared from public view in 2002, yet a Guantanamo bay detainee (also an MI5 informer) says that MI5 were hiding Qatada in a flat in Bermondsey, South London.
All told, it looks as if our intelligence community has a "hot potato" in Abu Qatada. If he is deported, he will undoubtedly tell his version of how MI5 tried to use him as an agent - although it looks as if he was using them. 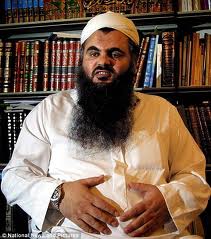