Andrew Marr and the Titanic 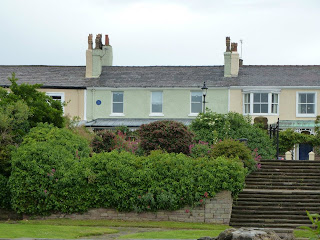 HOME OF CAPTAIN E. J. SMITH, WATERLOO, MERSEYSIDE - THANKS TO PHIL SCOTT FOR PERMISSION TO USE THIS PHOTOGRAPH.

Now that I have finally recovered from the coverage of the Titanic disaster which was all over our media a couple of weeks ago, I think it time for a personal assessment. For myself, I found a good many of the programmes and articles which appeared to be of great interest. However, after a few days of it, I began to get a little tired of the whole thing. At the finish of the commemorations, I could not even bring myself to watch James Cameron's film on TV. Andrew Marr, on his Sunday morning programme, commented that he hoped the dead of the Titanic (including, presumably, the survivors of the disaster, who are also now dead) would be allowed to rest in peace.
I have to admit, he had a point. Besides the over-exposure of the 100th anniversary, there are one or two questions that never get asked. Why, for instance, do we pay so much attention to the Titanic disaster, in which 1,523 people died and not to the world's worst maritime disaster - the torpedoing of the Wilhelm Gustloff in 1945, with the loss of 9,500 lives? Nor was the Titanic's sinking the worst British catastrophe at sea. The troopship Lancastria sank on the 17th June, 1940, with the loss of at least 4000 lives (some say that figure is too low). Also - why do the names of some (not all) of the poor souls who perished in the Titanic disaster live on in our memories, and yet others who died in similar events remain anonymous? I myself know the names of quite a number of people who died on the Titanic in 1912, as well as some survivors. However, I do not know the names of any of the 32 people who perished on the Costa Concordia on 13 January 2012, and don't suppose I ever will.
So why is this? I think it has happened - at least partly - because of a nostalgic image of Anglo-American Edwardian society. TV programme makers regularly present pre-WW1 Britain as a golden age, the passing of which is symbolised by the wreck of the great ship Titanic. This rose-coloured spectacle has a wide appeal, shown in the success of series such as "Upstairs Downstairs" and "Downton Abbey". Even "Dr Who" has featured an episode about the Titanic.
Anyone who has studied the period, however, will know that the Edwardian Era was no golden age. There was widespread industrial unrest and dire poverty in urban areas all over Britain. The women's suffrage movement was agitating violently for the right of women to vote. In Ireland, a massive conflict was brewing with Ulster Protestants mobilising against Home Rule for Ireland (with the active support of leading Conservative politicians), and independence movements in the Empire beginning to become active. Some people even maintain that a revolution would have happened in Britain, had WW1 not broken out.
So, perhaps we need a re-assessment of the Titanic tragedy. Should we not stress the fact that it was all completely preventable? Had Captain E. J. Smith, whose house is pictured above, halted the Titanic when he learned of the presence of icebergs in the Atlantic, it is very unlikely that the ship would have sunk. And of course, had there been enough lifeboats, most passengers and crew - perhaps all - would have been saved.
On the positive side, should we not honour the forgotten heroes of the disaster? I am not here referring to the men who did not rush the lifeboats, or the men and women who manned the lifeboats so gamely. One individual who deserves credit is Captain Arthur Rostron, skipper of the Carpathia, who sped to the aid of the survivors. No mention was made of the fact that the USA thought enough of Captain Rostron to award him a Congressional Gold Medal. All the Titanic survivors praised the crew and passengers on the Carpathia.
Lastly, I was saddened to see that very little mention was made of the Titanic's crew below decks, who worked to the last minute to keep the generators working to power the doomed ship's lights, and to pump out as much water as they could, in order to keep the ship afloat as long as possible. Very few of those brave men survived.
Or, as Andrew Marr has suggested, is it time to forget?
Posted by Geoff Parry at 18:47