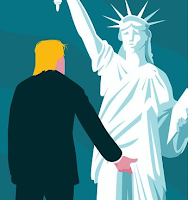 Donald Trump is a businessman. According to some analysts, he hasn't been anywhere near as successful in business as he should have been, given the fortune he inherited, but even so, he is undeniably very rich and is accustomed to getting what he wants. As the boss for most of his working life, since the early 70s in fact, he is used to sycophancy, complete obedience, and an unhealthy dose of flattery. People who get in his way are either sacked if they are among his staff, or vigorously counterattacked with maximum force if they are not. In short he is a man who is completely programmed to get his own way. Even his so-called reality TV show, The Apprentice, involved telling people, "You're fired!"

It is symptomatic of the vanity of the man that he decided to spend some of his fortune buying his way to the presidency of the USA, which he narrowly did - narrowly because he gained less of the popular vote than his opponent, Hillary Clinton. Despite that, the American electoral college system awarded him the victory. Smug British Facebook postings declaring that this could "only happen in America" show ignorance about our own system. The UK has had had two general elections since the war when the winning party had a smaller share of the popular vote (1951 and the first 1974 election) because of the our 'first past the post' system.

His presidential style is that of the spoilt brat. He is incredibly sensitive to criticism, and seems genuinely upset by it because he isn't used to it. So accustomed is he to getting his own way, even when he was wrong, that he gives the impression of believing his own infallibility. News is what he decrees it to be, and evidence isn't necessary. He has never needed it in his business decisions and cannot adjust to having to consider different opinions as president.

His method of responding to opposition is juvenile in the extreme: tweets that end with an insult. Meryl Streep is a mediocre actress, despite 161 awards so far; he described judges who had frustrated his anti-Muslim order as "so-called judges"; some tweets end up with toddler speak, such as "bad man". When Vanity Fair published a review headlined, "Trump Grill Could Be The Worst Restaurant In America", Trump commented on the magazine's "really poor numbers - way down, big trouble, dead! Graydon Carter, no talent, will be out!" even though Vanity Fair's sales have actually increased 24% under the editorship of Graydon Carter. Like a toddler, he hurls ineffectual and juvenile insults when he's been frustrated, irrespective of the facts. 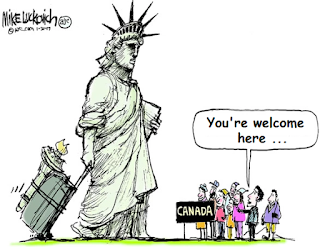 He loves to repeat the phrase 'fake news', but is guilty of making it up himself, such as when he told his followers to look what happened in Sweden the night before. Nothing had happened in Sweden on that night, no deaths associated with violence or terrorist incidents. On the other hand, 32 Americans had been killed in the USA by their fellow countrymen with many others injured in 128 violent incidents involving guns on the day in question.

Trump claimed that he had achieved a record number of votes in the electoral college, until journalists pointed out to him that Obama, Bush Sr, Bush Jr and Bill Clinton had all recorded more votes in the electoral college than he had. His assertions that 1.5 million turned out for his inauguration are not supported by photographic evidence which compared his inauguration to Obama's; it is clear that far fewer people were there. 1.8 million is the estimate for Obama's inauguration, while one estimate for Trump's bash is 250,000. The Washington Metro had carried only 193,000 passengers by 11.00am on the Friday, significantly fewer than Obama's two inaugurations and slightly fewer than Bush’s inauguration in 2005.

More recently, he has demanded that that charges be laid against Obama for tapping his phones at Trump Tower, insisting that the FBI and Congress should investigate his assertions with the same energy they are employing to investigating the Trump team's dodgy dealings with Russia during the election campaign. He didn't produce a shred of evidence to support his claims, whereas there is some evidence that there have been untoward dealings with Russia. Misspelling "tap" as "tapp", he concluded his Twitter rant with the customary childish insult, describing his predecessor as a "Bad (or sick) guy".

He is quickly becoming frustrated that his customary methods of bluster, unsubstantiated assertions, firing at will, and maximum force against anyone who opposes him that were his style as a mega-rich boss are not working as he would wish as president. He gives every indication of not understanding how the USA's system of checks and balances work by his repeated attempts to trample roughshod over them. His reintroduction of his amended Muslim banning order is evidence of this. 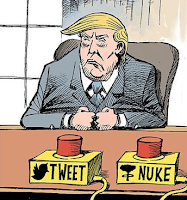 We have a president whose rationality appears to be no more developed than that of a 5-year old, who seems quite unable to distinguish reality from fiction, and who believes that his own hunches, prejudices and random assertions amount to truth. To be honest, I am not quite sure whether he really is incapable of perceiving the truth, or, alternatively, whether he doesn't think it matters and will cynically make any assertion, or propagate any story, that suits him. My own opinion, for what it's worth, inclines to the former.

He has been in office for little more than 60 days and already those American checks and balances carefully devised by the founding fathers are being strained to the limit. We have nearly four more years of this to come from a man who is commander-in-chief of the armed forces and whose finger is on the nuclear button. This means that, while we have laughed at him and we probably will do again, we must not underestimate how frighteningly dangerous this vain, irrational and very immature president potentially is.
Posted by Neville Grundy at 08:56