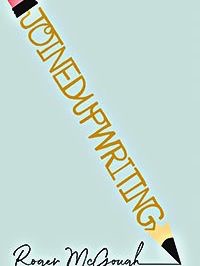 "Joinedupwriting" is the latest volume of poetry by the one-time Mersey poet, now described by Carol Ann Duffy as "The patron saint of poetry": Roger McGough. I'm unsure how McGough has reacted to that, as he is 81 years old and, as so many of his poems betray, highly conscious of his own, and others', mortality. As he says, in "Big Hugs":
"Before I go, who do I give a hug to?"
This poem (pp74, 75 in the new hardback) is a retrospective glance backwards over his long career and the range of topics he has covered since emerging as one of the three poets featured in "The Mersey Sound", who appeared on the scene like a breath of fresh brown ale in the 1960s. McGough is now a CBE, and an FRSL, but still writes broadly about the same issues he began with back in the 60s. A selection of topics are "Exes", classmates, teachers, friends, family, Hull University and, of course, Liverpool. In the poem, he asks:
"How do I give Liverpool a hug?
High five a Liver Bird?"
With his marvellously quirky selective memory, he is able to juxtapose a poem about the Queen's visit to Liverpool in 1949 and another about "The Bridle Path at Litherland" (pp 16,17). With typical McGough wit, he remembers Lord Gloucester, "fat as a globe", bowing to Her Maj and his hat falling off. As for the Litherland bridle path, he observes:
"We saw fish and birds and gypsy boys,
But never once, a bridle".
As well as affectionate recollections of his Liverpool youth, he also remembers the religious bigotry of the day (and, to some extent, now) between Protestants and Catholics in Liverpool. In "Of Protestants", he calls up the memory of Sister Malone who thought Protestants should burn in Hell.
McGough is of Irish Catholic extraction; in his personal life, he has taken a DNA test to check how English/Scots/Irish he is. He told "The Irish Times":
“I did that DNA heritage thing and found out I am 70 per cent Irish, not surprisingly, and 16 per cent English.”
Only McGough could have turned such an experience into a poem: "The Full English" (p.9), where, as he confides:
" The results confirmed/what I had long suspected, a dearth of Englishness...but 12.5% Spanish, Italian and Greek?"
One thing I have always admired about McGough is his tender, yet unsentimental way of writing about his relatives. One of the earliest, back in the 70s, was "Sad Aunt Madge", although I was never sure whether she was a fictional character or not. Then there was "Snipers", about an uncle who returned from wartime service in Burma, and suffered a breakdown. The most moving for me, however, was "Hearts and Flowers", a non-fiction poem about a spinster relative who died alone in a council flat - a poem in which the pain of McGough's sadness is almost palpable.
In his latest collection, Roger acknowledges that he has written much about his late docker father, and so many other relatives, but not his mother. He addresses this in "Where is my Mother? (p.73), saying:
"And the one missing, my mother, where is she?
Memory fading, at the margin still, just out of sight,
The one I aim to please with every poem I write". 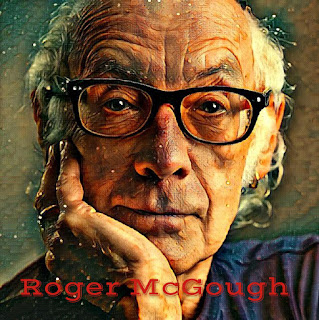 By way of farewell, McGough has saved an apology to us for the last pages of the book (pp.76,77) in "So many Poems, an Apology". Roger recaps again over his motives for writing poetry. It is a marvellous piece of poetic self-analysis and deserves to be read in full. His closing lines, however, can to be quoted here:
"From wherever it comes, and for whatever reason,
I apologise for writing so many poems".
No need to apologise, Roger. Your poetry has been a faithful companion and inspiration to so many people for so many years - including me.
Just keep writing. 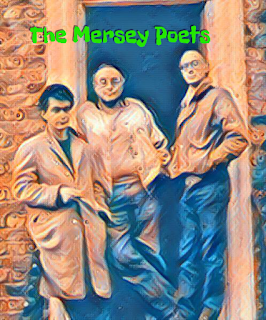 The Mersey Poets, back in the day. Left to right: Brian Patten, Adrian Henri (d.2000) and Roger McGough.
Posted by Geoff Parry at 12:09