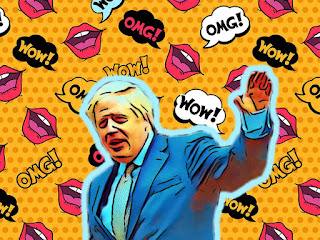 As you might expect, I am not pleased with the Election result. Many people who did not vote Tory feel the same and are asking themselves how it could have happened. After all, the record of the Conservatives in power, and their transparently dishonourable leader, would, under normal circumstances, have led to a resounding defeat for the Conservatives. But we don't live in normal times, and we are not living under normal circumstances. I think that the two main factors (not all) underlying the Tory victory are the continuing Brexit debacle and the ongoing crisis in the Labour Party.
What has appalled many of us is the fact that the Tories have done so well in traditional Labour constituencies. Boris and his merry men have made a special effort in appealing to the Leave voters in these areas, and it seems to have worked. People in such areas who voted Leave have felt that they were being ignored, and it did not help that there was no major concerted effort by all Remain parties to counter that feeling. Nor did it help that Labour refused to join the Remain camp, preferring to fudge the issue by promising a second referendum, which won't happen now.
The Labour Party, as many have noted, has not presented itself as an attractive alternative. The anti-Semitism crisis, whatever your view on that, has not helped Labour's image and has alienated many Jewish members and supporters. I have watched the response of Corbyn loyalists to this criticism and have noted their defensive reaction. The usual response has been the ultra-Left knee-jerk tactic of ad hominem attacks upon critics. The Chief Rabbi, who recently publicly criticised Jeremy Corbyn, immediately was demonised as a Tory and a Zionist propagandist. Jewish Labour MPs and others who have not followed the party line were vilified and abused to a horrendous degree. This witch hunt kind of activity might be acceptable in (now defunct) Respect or the SWP, but does not belong in grown-up politics. Abuse, ad hominem attacks and internal bickering are not a good advertisement for any democratic political party. 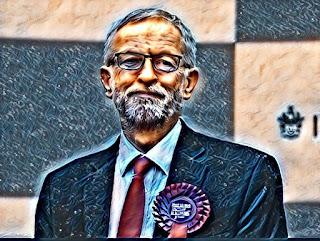 Unlike the opinion held by many of his critics, right and left, I believe Jeremy Corbyn to be a fundamentally decent man. I do not believe that he is a racist or an anti-Semite. He has a long and distinguished history as an opponent of Apartheid and the overtly fascist groups, such as the National Front. However, despite his anti-racist credentials, I believe him to have been a disaster as Labour Party leader. His insistence, for example, on making support for Palestine as part of the Labour Party programme was stupid and counter-productive. For one thing, it alienated many Jewish voters and, on the other hand, was totally irrelevant to British politics. His conspicuous lack of dynamism in dealing with Brexit was completely underwhelming and, I believe, cost Labour a lot of support. One Labour activist contacted me to say:
" In this working class area I delivered Labour pamphlets, but was amazed at the number of people who said 'I will never vote for him!' It was a sad comment as I have a very high opinion of Jeremy Corbyn."
Whether his partisans like it or not, a lot of people saw Corbyn as too far to the Left and too doctrinaire.
So, we who oppose them are now stuck with Boris and Brexit. All the Tory pundits in the media are glowing with triumphalism and speaking with confidence of what they intend to "achieve". Sad as I am about the election outcome, I am happily convinced that they are not in for an easy ride. The SNP triumph in Scotland will mean determined opposition to Johnson's plans for Brexit. Labour will be forced to exorcise its demons and become electable. On the dark side, the far right will become even more aggressive than they are now. I believe that we will see an increase in hate crime and fascist activity. I think we saw the beginnings of this on election night when a group of  hecklers - clearly of the far right - disrupted John McDonnell's acceptance speech after he retained his seat in Hayes and Harlington.
There are signs, also, that our ethnic minorities, even those who were born here, are feeling apprehensive, following Boris's victory. The Huffington Post interviewed a number of Muslims in the North West of the UK and they express considerable (and understandable) concern for the future. 20-year old Zainab Patel, a Blackburn university student, told The Huffington Post:
“As a Muslim, it makes me feel we are not welcome in this country any more...I feel so upset as everything feels so uncertain.."
She went on to say, quoted in the same article:
"People have gained confidence to vote that way and be more outspoken and vocal about their racism....With Boris Johnson’s leadership, it has given people in the UK confidence to air their racist views and their intolerance of people who are different to them.”
This "confidence" has been growing since the EU Referendum. It will not diminish under Boris, and the far right groups, including the rump of the Brexit Party, will not hesitate to exploit it.
The Tories will make some apparently generous contributions to education and the NHS, but will cut them back when they need to. They will maintain a nuclear deterrent, but will - I predict - achieve a rapprochement with President Putin. Immigration will become an even more emotive issue and Ireland an increasing cause for concern - to put it very mildly. We are in for a rocky ride. In a very short while, I think we shall see a sea change in the political scene. The groundswell of support for the Tories cannot survive their policies. Around Britain, people my age will be searching their cupboards for a badge from the Thatcher era:
"Don't blame me, I voted Labour "..
Posted by Geoff Parry at 15:17