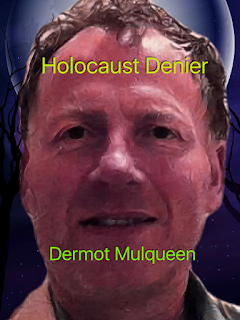 Last night's documentary by David Baddiel - "Confronting Holocaust Denial" - divided opinion before and after its screening. Given the fact that any sane person knows that Holocaust Denial is ridiculous, it might be thought such a confrontation superfluous. Certainly, many influential voices questioned the purpose of it. As The Guardian says:
" Anthony Julius, who successfully defended the American historian Deborah Lipstadt in a libel suit brought by the Holocaust denier David Irving, told Baddiel: “You don’t need to give these people airtime – so don’t.”
Baddiel correctly pointed out that the situation has changed since the David Irving libel trial in 1996. Since then, social media has become a platform for the extreme right and Holocaust Deniers, giving them the airtime they craved back in the 80s and 90s.. Baddiel commented after the programme:
“Our culture is being shaped by trolls and the Holocaust deniers are a very extreme example of the trolls. Ignoring them has not worked. It doesn’t mean that confronting them will work completely but I think it’s a debate we have to have."
The only direct confrontation Baddiel had was with the Irish Holocaust denier seen above: Dermot Mulqueen. Mulqueen would once have been dismissed as a harmless nutcase and his statements in his "discussion" with Baddiel are proof of some mental derangement. According to Mulqueen, the fact that Jews buy German cars proves that the Holocaust didn't happen (!!!). He also sang a bizarre song in which he rhymed "Mercs" with "Auschwitz perks" - it should be seen to be believed.
Rupert Hawksley, in The Independent, commented:
"The pair had an unproductive, ill-tempered discussion. And it’s that word, “discussion”, which is so problematic. It indicates legitimacy on both sides, something which Holocaust deniers do not deserve. By arguing with Mulqueen, Baddiel unwittingly acknowledged that there was an argument to be had – when there isn’t."
Maybe, maybe not. After years of keeping a weather eye on the far Right, my only criticism is that Baddiel, who lost many relatives in the Holocaust, tried to engage meaningfully with an obvious idiot. The more intelligent - and thus more sinister - Holocaust deniers, such as David Irving and Richard Verrall, would have been better opponents to challenge, as they have a veneer of intellectual credibility. Defeating them in a debate would have achieved something positive, as was proven when David Irving failed in his 1996 libel action against Deborah Lipstadt. The film "Denial" recreates this event, and is of itself a convincing refutation of Holocaust denial. 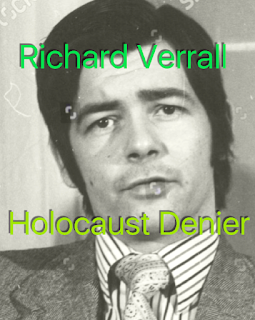 Baddiel might have had some fun in confronting the Holocaust denier above - Richard Verrall, who wrote a notorious pamphlet published in the 1970s: "Did Six Million Really Die?". Verrall wrote this poisonous tract under the pseudonym "Richard E. Harwood". At the time, he was a senior member of the National Front, and the NF for years denied that the true author was Verrall. In 1983, the Canadian Criminal Court prosecuted the book's publisher, Ernst Zundel (another Holocaust denier), saying:
"The pamphlet Did Six Million Really Die? does not fit with received views of reality because it is not part of reality".
Indeed not, and Baddiel acknowledged that there have been successful legal actions against Holocaust deniers, but, as he explained to Anthony Julius and Deborah Lipstadt in the programme, since those two main court cases, the Holocaust deniers have gained a wider audience on social media. David Irving, in particular, boasts of his following on YouTube. I believe Baddiel to have been right in his attempt to expose the disturbing amount of online neo-Nazi propaganda, most of which is unutterably vile, and he had an interesting exchange on this issue with Richard Allan, Facebook's director of policy in Europe. From The Guardian again:
"Allan told Baddiel: “We have a policy on hate speech so direct attacks on Jewish people will come off the platform. But to make the wrong statement about the facts of the Holocaust – ‘I do not think the Holocaust happened’, or ‘I think the Holocaust happened with this number of people dead or that number of people dead’ – may be permitted on the platform.”In response, Baddiel said Holocaust denial was “a direct way of saying Jews are liars, Jews have tricked the world for their own gain, Jews are the most evil, pernicious race that exist. It is hate speech. There’s no other conclusion.”
Baddiel examined a league table for Holocaust denial which showed that while 6% of Britons think the Holocaust never happened, the figure rises to 82% in the Palestinian territories that border Israel. A London-based academic attributed this to a reaction to repression of the Palestinians by Israel. I demurred at this, as, while acknowledging that the Palestinians have a case, a lie is a lie, and Holocaust denial is just that.
The most affecting ( and effective) moment in the programme was Baddiel's meeting with a Holocaust survivor, Rachel Levy. This dignified lady, well into her 80s, spoke movingly about how she was separated from her mother and her siblings upon arrival at Auschwitz; she never saw them again. Transferred to Belsen, a girl of 14, she saw her last remaining relative die and survived herself only by a miracle. The stories of actual survivors, such as this, have a greater impact rather than attempts at dialogue with warped individuals like Mulqueen. People such as Mulqueen, Verrall, etc, are not rational people, and even when their silly beliefs are refuted, they carry on believing them anyway.
This is not to say that I believe Baddiel to have been wrong in what he set out to do; I just think that he should have kept his temper when talking with Mulqueen (to be fair, he acknowledged this). Quoted in the Daily Mail, Baddiel says:
." I think it's important to understand however mad Dermot seems, we're not shooting fish in a barrel here, people believe this s***."
There, I think, we can discern a more effective way that Mulqueen could have been tackled. Baddiel, understandably enough, given his feelings,  did not employ the most potent weapon in his rhetorical armoury: his gift for satire and comedy. Instead of trying to engage this lunatic in rational discussion, he could have held him up to ridicule, exposing Mulqueen as the contemptible buffoon that he is.
To conclude, I refer you to the title of this post. The "other myths" referred to are the ones I wrote about on January 30th: the "Bible Burning myth" and the "We Knew Nothing myth". In our final assessment of these two delusions, and Holocaust denial, we should ask: who benefits from the myths? And the answers, I believe, are easy to locate. Briefly, the Bible Burning myth implied that the Nazis were anti-Christian and were opposed by the organised German Christian faith groups. The aim, you see, is to portray the German churches as victims of, and opponents of, the Nazi regime. Nothing could be further from the truth, but this is not the place to discuss it. "We Knew Nothing" lets all the WW2 German population off the hook for Nazi war crimes. Again, this is nonsense: the Nazis had widespread popular support - not total support but a majority large enough to intimidate the active German opponents of Hitler and drive them underground.
Lastly, who benefits from Holocaust denial? Who profits from the activities of Dermot Mulqueen, David Irving, Richard Verrall, Ernst Zundel and all the other self-styled "revisionist" lying deniers of the Holocaust? We could say anti-Semites, but they are like that anyway. We could point the finger at the Palestinians, but, I believe a fair and just settlement of their grievances would see a drop in their Holocaust denying. No, the only beneficiaries of Holocaust denial are the neo-Nazis, who are rising from the deep all over Europe - even in countries such as Poland, which suffered so much from Nazi occupation in WW2. We must not take our eye off the ball here. Baddiel made mistakes in his programme, but it was still an important documentary that we should all watch. Holocaust deniers are propagandists for the Nazi revival. We must recognise this, and be vigilant. "First they came for the Jews…" 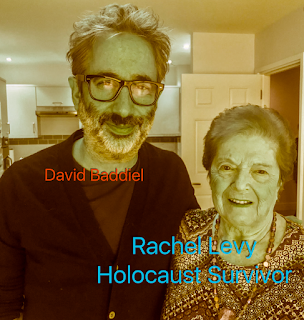