I can just imagine the response to the question above! Mr Ross seems capable of dividing opinion, but even his admirers would baulk at that proposition. But I'll come to that.
In this week's "Radio Times", Mark Lawson (Radio 4) and Quentin Letts (Daily Mail), take widely differing views on the lad from Leytonstone. Mr Lawson says that Ross: "...was a fresh, irreverent TV natural who changed British broadcasting". Mr Letts, on the other hand, says that Ross: "...has long embodied the predictable, sarcastic silliness of so many baby-boomers. The BBC is well shot of him."
Both men make telling points for and against "Wossie", but I think that both have missed something about him that is highly pertinent. JR is a shrewd operator who likes to come out on top. He picks his targets with care and is careful never to upset the right people. Like a playground bully, he only ever attacks easy targets, such as Mrs Thatcher, with his smutty questioning of David Cameron. Then there was his sexist humiliation of Gwyneth Paltrow and Keeley Hawes and his (and Russell Brand's) notorious baiting of Andrew Sachs over his granddaughter. None of these people were any threat to JR, which goes some way to explain why he felt free to insult them.
And yet - Ross had no scruples about appearing in a programme from Buckingham Palace, where he unctuously (and nauseatingly) fawned about the Queen. Also, as Quentin Letts points out: "...Mr Sarcastic was a soft touch for Hollywood PR agents." As the old saying goes, JR knew on which side his bread was buttered. He is no liberal iconoclast, as far as I can see, nor is he a chirpy East End baby boomer. I think he is well aware of what he is doing, and perhaps his excesses are carefully prepared moves in preparation for something else - like a move to ITV. In short, I think both Lawson and Letts are wrong about JR; he is a cynical opportunist who will stop at nothing to get what he wants - even to the extent of harassing a harmless old man like Andrew Sachs.
But is he a cultural icon? Well, yes, he is in a way. He is a rich man who stands as an example of what can be achieved by self-promotion, grovelling and being nasty to people. No wonder so many young people believe they can acquire fame and fortune without hard work. 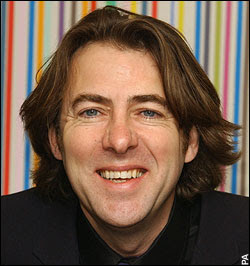