The TV news broadcasts, and the rest of the media, are buzzing with the way today's student protest against tuition fees turned violent. The Metropolitan Police are very embarrassed about the fact that their preparations were inadequate, and the Millbank Building will need considerable redecoration. Much as I deplore the violence, I regard the events at Millbank as an example of what I referred to in my previous post - Propaganda by Deed (PBD). The style of the attack today is very similar to that seen during the "Stop the City" demos. This takes the form of attacking symbols and properties, rather than people - despite serious scuffling, the demonstators concentrated their destructive efforts on the Millbank Building itself, rather than the small number of beleagured police trying to defend it. This, together with the fact that the protesters who made it to the rooftop waved Anarchist flags (strictly speaking, Anarcho-Syndicalist flags, the Anarchist flag is black) leads me to think that the violent minority (or the revolutionary vanguard, depending upon your point of view) were Anarchists, engaged in PBD. I have no doubt that, when arrested demonstrators appear in court, we will find that many are members of Class War and similar organisations.
As a one-time student radical (well, I thought I was) who went to University when grants were available, I do sympathise with how students feel about the rise in tuition fees. I anticipate that less and less working class students will go to University, and this country will be the poorer for it - as we were before the advent of the now-disappearing Welfare State.
However, I think that today's PBD will be counter-productive, as it will only alienate public support from the student cause. It's one thing to protest against the actions of the state with PBD, but the state, the media and public opinion will only retaliate with far more effective propaganda AND deeds. 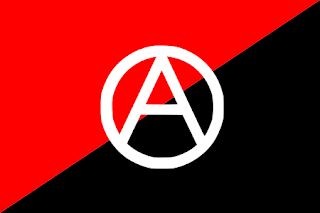