Easter, Labour Anti-Semitism and the PPL

Easter Sunday, when Christians celebrate the Resurrection of Jesus, seems a good time to discuss the issue of anti-Semitism in the Labour Party and the coming actions of the PPL (pro-Palestinian Lobby - my invented term), following the latest killing of unarmed Palestinians by Israeli Defence Forces.
It could be argued that anti-Semitism is 2018 years old, if we take the Bible literally. According the Gospel of Matthew, 27:25, Pontius Pilate released a convicted thief, Barabbas, to placate an angry Jewish crowd. Pilate had declared Jesus an innocent man, but, the Bible says:
"Then answered all the people, and said, His blood be on us, and on our children."
This Biblical quote, along with others, was used to justify anti-Semitism in all its ugly forms for hundreds of years. In the 19th Century, Houston Chamberlain (not Nietzsche, as popularly supposed), developed anti-Semitism as a pseudo-scientific theory which inspired Hitler's "racial theories". Modern neo-Nazi "theorists" still include Chamberlain in their booklists.
This potted history of mine is not strictly relevant here, but needs to be borne in mind when considering the "anti-Zionist" position and the fact that anti-Semitism as such does still exist.
The PPL will soon be organising mass protests against the recent killings of Palestinians. The PPL celebrity line-up, which includes George Galloway and other dubious characters, will be making impassioned speeches via any and every media outlet. They will piously deny being anti-Semitic, chanting the ancient mantra: "anti-Zionism is not the same as Anti-Semitism" (I wish I had ten quid for the number of times I've heard that), and accuse their critics of everything from being accomplices to murder to being agents of Mossad.
I'd like to pick up on the last point here: the PPL members I've talked to cannot endure the slightest criticism and usually overreact. Simply saying something innocuous like "my Mum went on pilgrimage to the Holy Land last year" draws vitriol from the mouth of a hardline PPL member. All of which, I think, points to a sense of insecurity on the part of the so-called "average" PPL member.
For there is no average PPL member. The PPL, as I have said before, contains a wide spectrum of opinion, ranging from people who are genuinely concerned for the Palestinian people to fanatics who oppose the very existence of the state of Israel, across to the neo-Nazis (the rest of the PPL don't like talking about them) who want to continue where Hitler left off. This can lead to confused reactions when you question PPL supporters. Here are three gems I have gathered, after conversations with PPL believers.
1. "I like Jews, but not Israelis".
The idiocy of this is obvious; most Israelis ARE Jews.
2. "Zionists control the US media".
This questionable belief could have been said by a neo-Nazi - even without changing "Zionists" to "Jews".
3. "Holocaust denial is wrong, but it's all right if the Palestinians do it, because they're being oppressed by Israel".
This fatuous statement is so ridiculous as to need no further comment.
But - do I believe that the PPL section of the Labour Party are anti-Semites, along with Jeremy Corbyn? Well, no, although I have no doubt that some are. Fascist infiltration of Labour has happened before, the most famous case being that of  British Movement member Peter Marriner, back in the 70s. And there is electoral opportunism to consider. As Baroness Deech has said:
"Too many Labour politicians cravenly adopted the anti-Semitic tropes and anti-Israel demonization they think will get them British Muslim votes, rather than standing up to the prejudice that exists in the community".
To his credit, Jeremy Corbyn has said that more needs to be done on this issue. I wonder how Hamas and Hezbollah supporters of the PPL in the UK, who have marched with Corbyn on pro-Palestinian demonstrations, will react to that. 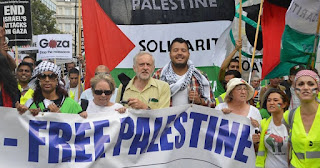 The committed PPL members in Labour's ranks will continue acting as a pressure group for their cause, whatever initiatives Corbyn may devise, and I think that this calls for a deeper analysis of the Left's antipathy to Israel. This antipathy is peculiar to Israel, as there were no protests from Labour PPL supporters  against Russia's campaign in Chechnya, Assad's crimes against his people in Syria and no sympathetic vigils for the Yazidis and Iraqi Christians, when persecuted by ISIS.
So what's the real beef of the far Left and the PPL when it comes to Israel? Well, I do not think that it is exclusively anti-Semitism (although anti-Semitism is certainly present among this section of the Left).Rather, I believe it to be anti-Western in motivation. Occasionally, the mask slips on this issue. I have seen Israel labelled in a PPL leaflet as "the West's attack dog". Now, that explains a lot, if it is a widely held belief among the PPL. In future, I believe that we should ask: who seeks to benefit if the West's attack dog is neutered or destroyed? I have answers already...
Happy Easter, everyone! 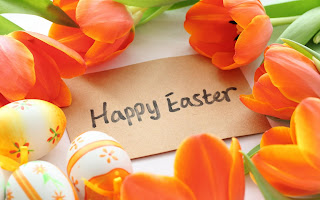