President Assad and Reasons to be Cheerful 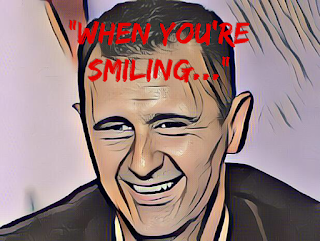 You might expect President Assad of Syria to be smarting with pain after receiving a good licking from the recent air strikes on April 14 against his (alleged) chemical warfare establishments. I am sure that many people in the West believe that. Unfortunately, TV footage of Assad shows him remarkably calm and unflustered following the US/French/British punitive action. In fact, he has a lot to smile about, as we shall see.
In the first place, he has seen relations between the West and Russia worsen, which means that he can expect even more support for his civil war from Russia and Iran, who will undoubtedly help Assad rebuild the chemical weapons capacity that he denied having. The airstrikes may even increase support for him within Syria. In any case, as "Private Eye" magazine has pointed out:
"... there have been 34 chemical attacks in Syria since 2013, to most of which the US has not retaliated"
All of which makes the recent airstrikes against targets in Syria look like a very expensive token gesture.
Secondly, the airstrikes have created dissension and argument in the three countries that launched the attacks. In Britain, as we know, there has been fierce debate in the House of Commons. Last night saw the Prime Minister under fire for joining in the attack without consulting Parliament.Jeremy Corbyn has secured an emergency Commons debate tomorrow on the convention that parliament should have to approve military interventions.
So far, so good. This is enough to make most politicians smile, but the knock on effects of this affair spread wider and deeper. Consider this question asked by Donald Trump:
" To Iran, and to Russia, I ask: What kind of a nation wants to be associated with the mass murder of innocent men, women, and children?"
Oh, blimey, that was a blunder! So far they have not replied, but Russia might respond by pointing out that the US military is no stranger to mass killing. They could mention the slaughter of Native Americans at Wounded Knee, 1890. They could bring up the My Lai massacre in Viet Nam, which happened on 16th March, 1968, and has just passed its 50th anniversary. 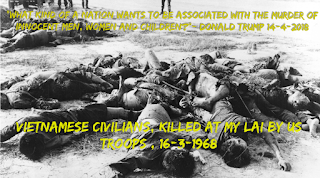 Then, of course, they could point to the US-led invasion of Iraq, in which at least 150,000 Iraqis died (some say many more).
In contrast, no more than 70 people are said to have died in the recent chemical attack in Syria. President Assad's smile is beginning to broaden.
The Russians may then turn the critical spotlight on us here in Britain. We have a number of bloody incidents in our military and political history that could be dragged up. There is the Irish Famine (1845-52), to begin with, which caused a million deaths in Ireland and an exodus of two million people by unwilling, but desperate, emigration. Then there are the concentration camps of the Boer War (1899-1902) to be accounted for, and the notorious Amritsar Massacre of 1919, which saw at least 379 Indian civilians shot dead - some say many more. 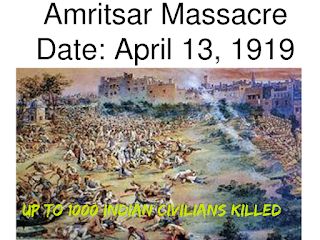 Then of course, we should remember the post-colonial campaigns following the end of WW2, culminating in the Bloody Sunday killings in 1972.
President Assad will be positively beaming by now.
As for France, they could be discomfited by being reminded of the Setif Massacre(s) of 8th to 22nd May, 1945, in which at least 6000 Algerians were killed by French troops. Then there is the Paris Massacre of 1961, in which up to 200 peaceful Algerian civilians were shot dead or drowned by French police. 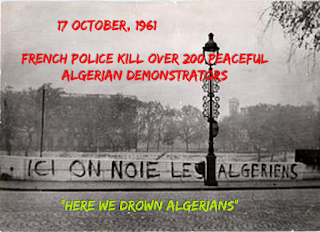 The Russians could draw attention to these incidents, but it would be unwise. They would be better leaving such condemnation to Iran or their apologists in the West, such as George Galloway and Peter Hitchens, two disparate commentators who are highly critical of the way the West treats Russia and Syria, despite their divergent political views.
For Russia, as would be very quickly pointed out, does not exactly have an unblemished record when it comes to indiscriminate slaughter. There are the million people who died during the Red Terror (1917-22), the millions who disappeared and perished during the Stalinist Purges and the horrific Katyn Massacre of April and May, 1940. President Putin's crackdown on Chechen rebels in the 1990s also produced mass killings - the most bloody being the Samashki Massacre of April 7th and 8th, 1995, in which up to 300 civilians died. 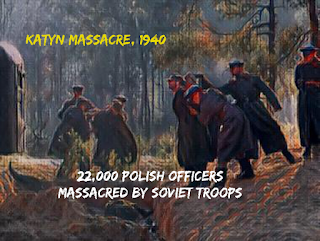 All of this would give President Assad much satisfaction; it shows that no major power involved in this dispute has the moral high ground. Both his allies and foes have much to regret in their pasts.
However, it is the actions of the present that will most please Assad. President Trump has categorically stated that he will not interfere in the Syrian Civil War. That will be good news for Assad for one simple reason: he is winning. Russian and Iranian help is bringing about a slow victory. He will have no need for any further deniable chemical attacks as he knows he can wage war without any undue interference from the West. When it is over, the Russian, Iranian and Syrian military will rejoice over their defeat of what they (and others) say are barbaric Islamists. At some time after that, the West will have no choice but to recognise Assad as the legitimate leader of Syria, and the recent chemical attack will be a distant memory - like all the massacres mentioned above.
No wonder President Assad is smiling... 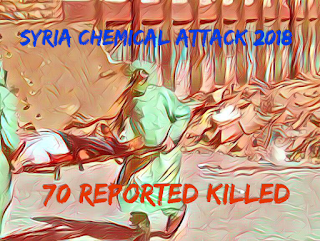