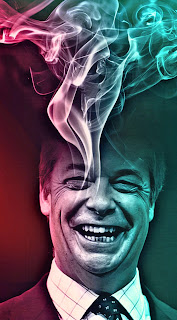 Well, he's done it again. Nigel Farage has had his ups and downs since he wrote the Christmas Message for this blog in 2016. He's left UKIP now they've shown their true colours, founded a so-called political party and been returned as an MEP, together with a number of fellow Little Englanders. Oh, dear - what a shame he can't keep spouting offensive opinions! You would think that he had enough to do, spearheading the march into the Brexit abyss, without passing pub-loudmouth opinions on the royal family. Is Mr Farage a pub loudmouth? Surely not!
Well, he has certainly upset a lot of people by his recent unguarded remarks about the royals. As we know, he described the late Queen Mother as "...an overweight, chain-smoking gin drinker". He was on a working holiday in Australia when he said it, and I wonder what he was drinking at the time. It might even have been gin.
He derided Prince Charles as "Charlie Boy", and said that he hoped the Queen would live long enough to stop the prince becoming king.
Of particular interest, though, are his comments about Prince Harry and Meghan Markle. As "The Sun" says:
"He criticised them for their “irrelevant” environmental and social justice campaigns when asked about their decision to have “two kids, maximum”.Farage also said Prince Harry used to be a “young, brave, boisterous” man who was the “most popular royal of a generation”.But he added that it has now “fallen off a cliff” after he met the 38-year-old American actress."
Now it gets interesting. Yesterday on Jeremy Vine's radio programme, the writer, Yasmine Alibhai-Brown, accused Mr Farage of "coded racism"; Stephen Doughty MP openly accused him of racism. He told "The Mirror":
"With his vile comments about the Royal Family, laced with barely concealed racism, Farage yet again shows his true colours. He's a pound shop fascist who only drapes himself in the British flag when it suits.'
Of these two reactions, I believe that of Mrs Alibhai-Brown to be closer to the truth. When the future wedding of the now Duke and Duchess of Sussex was announced, I believed it to be one in the eye for racists all over the world. I should have known that the racists would not take it without lashing back. The most extreme example of this was the planned terrorist attack on Prince Harry by two neo-Nazis. There is also what appears to be a sustained adverse publicity campaign against Meghan by the right-wing media. I'm not a royal watcher, but she seems to be under constant criticism  for all manner of minor infringements.
These "infringements" are hardly earth-shattering. She has a lavish lifestyle (haven't all the royals?); she has been guest editor of "Vogue" (what's wrong with a hobby?); she has a baby shower (so what?); she is allegedly trying to "celebritify" the royal family (what's new?). None of these activities are atypical of what the royals have already done. Quite rightly, many people have suspected that there are other reasons for this hostility to Meghan from the right-wing British press: she is a commoner; she has been divorced; she is (oh, dear!) an American; she (to use a Victorian racist phrase) has "a touch of the tarbrush", ie. is of mixed race. For me, and hopefully many others, these "outrages" are totally uninteresting and irrelevant. These spiteful attacks upon Meghan are clearly motivated by xenophobia, racism and old fashioned snobbery of the worst kind.
To return to Nigel Farage, I think it wrong to describe him as a racist or fascist, coded or pound shop. I believe Farage to be the same type of political operator as was his idol, Enoch Powell. Powell denied being a racist, as has Farage, yet both have an enthusiastic racist following. This is where Yasmine Alibhai-Brown has a point. Even though both men made no overtly racist statements, and perhaps have held no racist sentiments, the racist elements in our society interpret the public utterances of both Powell and Farage as being sympathetic to them. Please read my recent post as an example.
To finish on a simple human note, rather than a political one, I do hope Harry and Meghan weather the media storm around them at the present time. If they can maintain their happy relationship, that is the best possible way to confound their critics. Like the rest of us, they are entitled to go their own way. 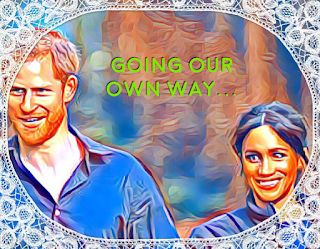